How We Did It: Filling the Talent Pipeline 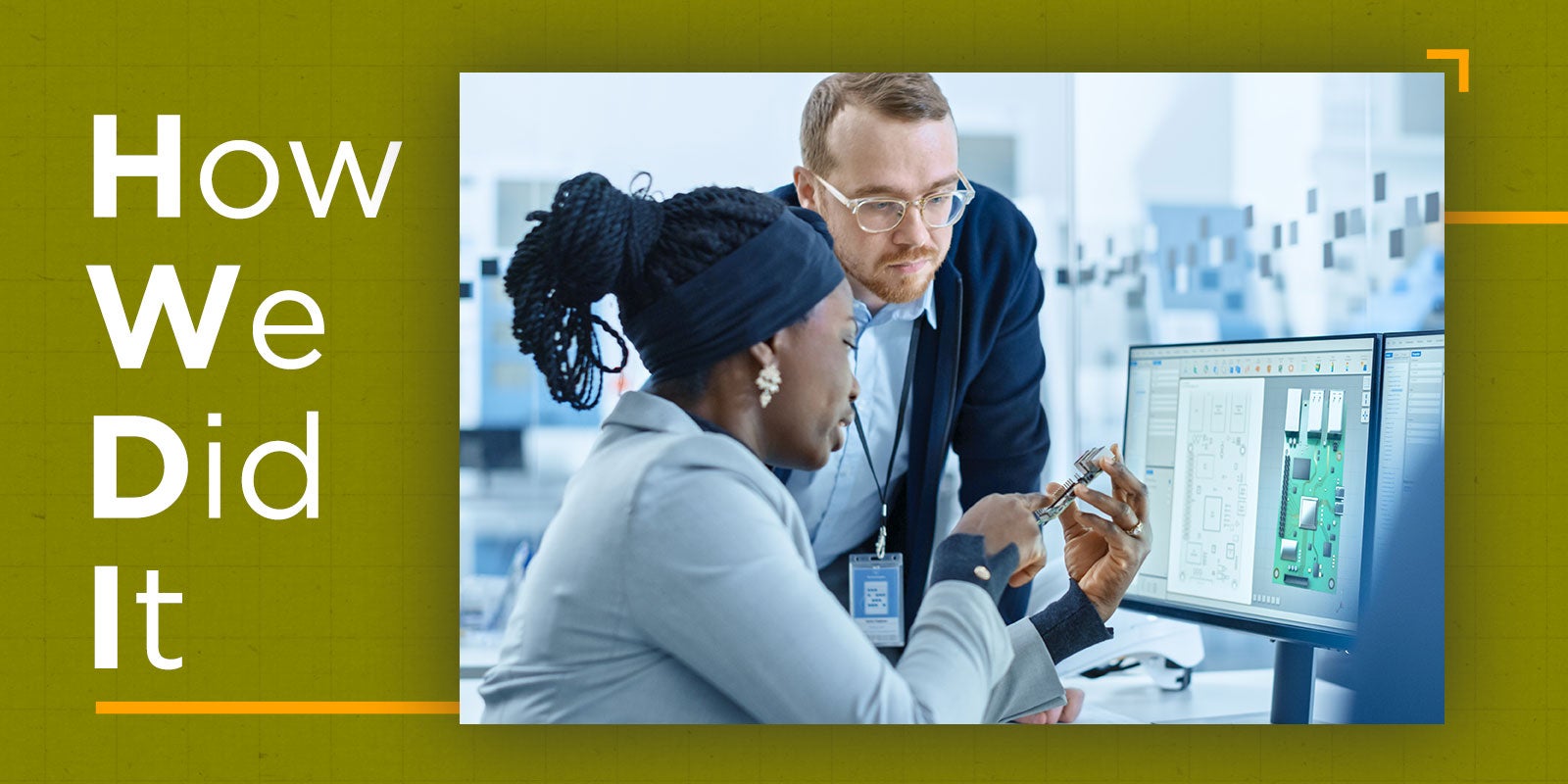 One major electronics company wanted to consistently fill its talent pipeline across each division in its North American operation.

With a DDI leadership development subscription, the company created a consistent competency framework across all divisions and then developed talent in each division against those competencies.

The company has seen increased leader engagement year over year and increasing positive rankings year over year from leaders rating the quality of their leadership development.

They created consistency cross-functionally in how people were developed, which hadn’t happened in the company’s longstanding history.

In this How We Did It  video, Alex Smith, consulting manager, shares how one major electronics company turned to DDI to help fill its talent pipeline across divisions.

In partnership with DDI, the company used content from a leadership development subscription. First, they created a consistent competency framework across the different divisions. The result? No matter the leader level, everyone was talking the same leadership language. This also helped the company develop talent consistently against those competencies.

Learn more about how this company broke down silos to improve the way it identifies, develops, and shares talent across the organization.

I'm here with Alex Smith today, and we're going to be talking about a huge electronics company where we worked with them to identify and develop talent across their North American operations. So Alex, thank you for being here to tell us about this. And give us a little bit of insight into this client and how we worked with them.

Yeah, thanks for having me, Beth. So it's a really unique client in that they're globally based, based outside the US, but they were having some unique challenges in North America, in that their North American operation is essentially a series of subsidiaries into the broader operation.

So different divisions who, some of them were acquired, some of them formed organically as part of the broader organization, but they were operating in a very independent and siloed manner, which was creating challenges in terms of talent development, talent identification, and also sharing of talent. So that was the broader challenge that they were having.

One of the ways we partnered with them was via what we would call a license within DDI, which is a unique way we partner with some of our organizations in that it's unlocking access to all of our content and intellectual property for our clients.

And we'll partner with our clients to ensure that they can make the best use of that and maximize the impact of that. So what that did for this organization was, we started by using some of the content in that license around our competencies to create a consistent competency framework across all of these different divisions and subsidiaries.

So that was a really important starting point because then, no matter what level of leader you were at within an organization, more senior leaders were speaking about it consistently in terms of what success looks like. And we also partnered with that organization to allow them to develop talent consistently against those competencies.

So once you started working to identify talent through those competencies, what did we do to help then develop them? So if they fell a little short or there were some areas where people needed some work, how did we work with them to do that?

One thing that we did that was really unique for them was because those subsidiaries were a little siloed, we brought one to two people from each of those subsidiaries together for the facilitator certification to ensure that they were all trained consistently in how to facilitate the content and how to best leverage the content. So that was one piece.

The other piece was we partnered with different parts of the organization to create learning journeys aligned to that content. So that no matter what level of leader you were in a different part of the company, you were going through a similar approach in terms of how you're being developed as a leader.

And were there any particular courses that they focused on?

Yes. So, in terms of where leaders tended to start off, even whether it's frontline leaders or mid-levels of leaders, it was with DDI's communication course, so communication, it used to be Communicating for Leadership Success. Now it's Communication: Connect Through Conversation where there's a focus on the key principles, which are highly personal needs and the interaction essentials to meet practical needs.

So every leader is starting out with that content and depending on the level of leader that might branch off into a coaching course that differs by level. And then some other content depending on where in the organization they sit.

Well, that's great. So what was innovative and different about this approach?

Yeah. One of the things that was innovative or different for this organization, what was different for them was, it was breaking down silos for the organization. So typically if you work in the avionics portion of the business, maybe you would only focus on this type of leadership development.

If you were in the traditional corporate, maybe you'd only focus on this part. So what it did that was unique for the organization was it created consistency cross-functionally and how people were developed, which hadn't happened in the company's 75 plus year history in terms of operating within North America.

So it was critical for them to achieve that business imperative. One thing that we're seeing now, which has been a journey for them is that they're starting to share talent for the first time where typically, for example, if you were in the avionics division, you wouldn't transfer back to corporate or transfer back to a different division within the company.

You'd continue to advance just within the avionics division. So what this is doing is that it's creating a way to develop, not just within your one division, but to develop laterally within the broader organization.

What kind of results has the company seen so far?

Alex, thank you for being here to tell us about this.

Thanks for having me, Beth.